If you are a dog owner and plan to include a calm or tender dog breed with tons of lushing personality, a name that clicks your mind is probably the Shiloh Shepherd. Contrarily if you are planning to choose a family-friendly plus working dog, you may think about a German Shepherd. Instead of nurturing a dog as a pet owner, you may be a pet researcher or general dog lover, and you are interested in digging deep into the Shiloh Shepherd Vs German Shepherd debate. Whether you search about their personality, exercise or grooming requirements, you’ll know all about them here.

Whatever questions you have about comparing Shiloh Shepherd and German Shepherd, we are here to help you out.

Out of hundreds of dog breeds, no one can compete with the Shiloh shepherd because of its unique behavior, enticing personality and intelligence. Thanks to its gentleness and cooperative behavior, it is a free servant and best companion. Shiloh shepherd is not a pure breed but a German shepherd and Alaskan malamute mix. Lady Tina Barber bred this breed in 1974, and she was impressed by Shiloh Shepherd’s smartness and intelligence. They act as human assistants because they serve as flock guards and child companions. Impressed by their brilliance, police use them for navigation purposes. They can live equally happily as single-person dogs or family dogs.

On the other hand, as the name shows, the German Shepherd originated in Germany having medium to large size, also known as the Alsatian wolf dog because of its wolf-like appearance. These Herding dogs are used for flock guarding, police, military, research, and rescue because of their strength and intelligence. It is a modern breed that originated in 1899.

For the best understanding of these two breeds, we shall go through the following characteristics of Shiloh Shepherd Vs German Shepherd.

The origin of Shiloh Shepherd and German Shepherd:

The genetic constitution of Shiloh Shepherd is a combination of a German Shepherd and an Alaskan malamute. Tina Barber developed the Shiloh shepherd in 1974. She wanted to create a larger breed than the German Shepherd having soft and gentle nature. Tina Barber’s childhood wish to develop a breed that is a mixture of gentleness, large size, mentally sound, friendliness and companionship came true. After many failures on other species, ultimately, her efforts bore fruit in the form of a Shiloh shepherd.

As the name suggests, the origin of the German shepherd dog belongs to Germany, dating back to the 1800s. It is medium to large, and the Alsatian wolf dog is another name for this wolf-like dog breed.

Shiloh Shepherds are considerably large and wide with various colors. Their beautiful and strong head, skull, and muzzle structures are the reason behind their uniqueness. They have triangular ears and white or different shades of dark to light brown eyes. The secret behind their enticing personality is straight back and the curvy plush tail. Shiloh is vigorous, healthy, calm and friendly than a German shepherd. 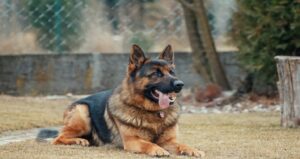 Like Shiloh Shepherd, German Shepherds have two coat layers; their coats are smoother and plusher than German. These layers save them from cold, warm, and other environmental stresses. The smooth coat is short and soft with long hairs, while the plush fur is denser under the smooth skin consisting of small hair on the neck, legs, and ears. Most Shiloh shepherd dogs have a different solid-colored coat; black, white, golden, tan, silvery, brown and red, etc. But some may consist of bi-colored coats such as back with white and white with tan, etc.

Compared to Shiloh shepherds, the German Shepherd is medium to large, having a broad head with a black muzzle and large erect ears that can often be pulled back during movement with medium-sized brown eyes. GSDs have long raised necks when excited and lowered when running at high speed. This breed has a long hairy tail reaching the hook. GSDs have two coats of hair, long and medium; the dogs with long hair coats are rare because the genes for long hair traits are recessive.

The height of Shiloh shepherd is 26 to 30 inches while that of German Shepherd is 22 to 26 inches.

The life span of Shiloh shepherd is 9 to 14 years, while German Shepherd lives for almost 10 to 12 years.

Shiloh Shepherd is loyal, friendly, calm, gorgeous, gentle, strong personality, and a good companion for family and children. Their intelligence makes them easy to train and act as servants. Their nature can be changed with the environment, as they are very intelligent. They hate to live alone.

Similar to Shiloh, a German Shepherd has a high level of intelligence. That’s why they are used for research, military, police, rescue, sheep herding, and as companions in journeys or anywhere, and can be trained easily. The most important thing is that they can help their owner in household work because of intelligence if they are trained properly. Their intelligence makes them attractive, smart, and personalized.

GSDs are popular over Shiloh Shepherd because of their working qualities. Police can use them to track criminals, serve for traffic control signals, and spy for military tasks. The trained dogs can train military soldiers and be used for rescue purposes in daily life. This breed can serve as sheep herding, children and family companion.

The major nutritional factor for dogs is protein having several functions such as building muscles, forming new skin, nails, hair, and best for bone development.

Exercise is compulsory to burn high calories and to ward off obesity. A 5 and 60 minutes walk is necessary for newborn puppies and young dogs, respectively. While a young German Shepherd requires 40 to 50 minutes of exercise, the puppy takes less time.

Thanks to their intelligence, it’s easy to train Shiloh Shepherds. A proper timetable, diet table, and positive behavior during training are necessary. If you behave angrily during training dog must learn angry habits. During training, make sure your dog is relaxed to learn serving habits (such as guarding children and flock guard).

To socialize both German Shepherd and Shiloh Shepherd dogs, introduce them to new places, sounds, people, smells, stores, and animals.

Shiloh Shepherd requires daily brushing, a strict vacuum cleaning of the living place because the long coat sheds a lot. Proper brushing is necessary for the growth and development of double coats. Haircut and nail trimming once per month is a must because long nails can cause injury or structural issues in any dog.

Hip dysplasia (caused during breeding) and bloating (caused by overeating or metabolic reaction) are two major health issues in both dogs. Elbow dysplasia is also a genetic disease. If there is a problem in the hip, it may lead to elbow dysplasia because this is due to bad genetic makeup. Epilepsy is now also discovered in both dogs though this was not believed a dog disease. Hemophilia, kidney stones, urinary tract infections and abdominal pains are major health problems for both breeds.

You can read more about 10 Most Adorable Terrier Breeds!