Dog training techniques are just like a puzzle-enough to befog you. In fact, taming a feral dog is more difficult than teaching a toddler. If your dog behaves wildly, then don’t blame the dog as it depends on your training how polished your dog is? Training a dog can be a lucrative job for dog owners. The truth is that a well-trained dog spends a respectful, active, and healthy life compared to thuggish dogs. Dog training can develop a bond of love between the pet and the pet parents. It’s not only you who is overwhelmed to know how to train dogs; in fact, it’s the story of every second pet owner.

Training a dog by appreciation and rewards is counted under positive reinforcement and was even used by Dawn Sylvia-Stasiewicz to train Obama’s dog. It’s a 100% working technique to teach your puppy every command of your choice, and we advise you to stick to it. Just remember what a kid’s expression will be if you give him a tip on everything he learns. You can imagine an appreciable training refinement from day one. The case of your dog is very similar to a kid. Just reward him for every single good deed and get what you expect. 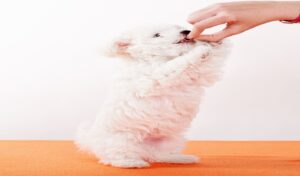 Old is gold, Reward-based training is the most simple, tempting, and old technique, and you can get the results immediately from this dog training technique. Linking dog’s behaviors with rewards as soon as the task is accomplished enforce positive training in dogs as a powerful tool to shape required traits in the dogs. You know well your puppy doesn’t care about money. So, a reward can be a food treat to change your dog’s taste or a toy to amuse it. Very often, dogs simply love to be praised by their owners with an enthusiastic voice tone.

Opposite to reward-based training is punishment by reducing the treats but never giving them physical punishment.

Dogs are sentient beings; they can feel, perceive, learn, and understand just like humans. Although their way of picking up the skills and perceiving is different and slow as compared to humans, they try to follow their owners secretly and openly. Science reveals that dogs don’t just need the necessities of life like food and shelter, just like humans, but they demand more than that. They love to be admired, loved, and cared for by their owners, and they are always ready to exchange their feelings and learn with humans.

So, in the scientific training method, dogs get treats for good, and the treats are taken away if they deny obeying the owners. It’s somehow different from reward-based training, where a dog’s negative act is ignored.

Clicker training or mark training is a form of reward-based training or positive reinforcement. In clicker training, we associate the reward with the clicker sound. A click indicates that the dog is doing what his master is expecting. It’s just an enticing way to remind the dog that a click sound means that he will be rewarded.

It’s a positive reinforcement dog training technique focusing on dogs’ psychology that the dogs are more likely to repeat or obey the commands in the future, followed by enticing rewards. So, the clicker is a small mechanical tool that helps the dog predict the exact moment his owner loves his job.

Example: You give your dog a come here command, who is playing far from you, and he comes to you. The moment he reaches you, he will hear a clicker sound exactly at that moment. For the sake of a treat, your dog will follow the “come here” command throughout his life. Obviously, your dog will never want to lose the treat.

To be honest, I wouldn’t say I like electronic training. It’s a kind of training in which poor dogs have to suffer pain on every electronic shock. Electronic dog training techniques are based on the idea that dogs will be punished by shock given by electric collar if they don’t obey the commands. So, it’s based on punishing dogs for breaking the rules instead of rewarding them for obeying the rules.

Among the dog training techniques, training by the electric collar is used for remote action controlling. For example, if a dog is trying to get rid of a fence or is not performing well for hunting or job place.

This technique is not recommended for normal dogs, and it has several negative impacts associated with it.

Model rival is one of the most important dog training techniques only if the dog and its owner have strong affection and bonding with each other. It’s no surprise to know that dogs observe and follow their owners. So, you can take advantage of a dog’s instinct to fellow humans. The major perk of this is that the dog doesn’t even focus that its owner is training it; in fact, the dog enjoys following its owner for a long time without frowning.

For example, you want to teach your dog some basic commands like sit down, stand up, come here, go, No, etc. Before availing of this technique, your dog must be frank with you, and he must know that you are the role model for him. So, you’ll perform every command practically in front of the puppy, and he will follow you smoothly.

It’s one of trainers and pet owners’ most acknowledged dog training techniques because it presents a live example to follow.

Alpha dog-based dog training method is based on the dog pack instinct mentality, very similar to wolves. Dogs are characterized into their categories, alpha, beta and omega. Alpha dog is the most dominant one, and its role is as a leader and is followed by beta dogs and omega dogs. Alpha dog rules the roost like a leader, and he doesn’t obey anyone. In fact, he dishes out the beta and omega dogs. Other dogs belonging to the pack shape and regulate themselves by following the model Alpha dog. 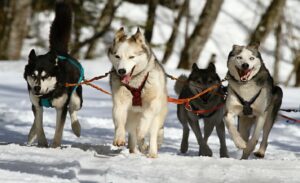 Alpha dogs have tough temperaments ready to take huge responsibility. In contrast, beta ones are moderate category dogs, and omega dogs are the most submissive, shy, and timid pups, always ready to follow commands.

For example, if the food is being served, alpha dogs will be the first to taste the food while others wait patiently until the alpha dog is satisfied. But at the same time, other dogs observe him and follow him. Cesar Millan introduced this method, which is ruled out nowadays from the dog training techniques because of its outdated approach.

The relationship-based dog training technique works as effectively as you and your dog understand each other quickly. It’s a mutual benefit-based method to build every desired command in your dog. For this method to be meaningful, you must understand your dog’s body language and fulfil his basic needs. You should be wise enough to understand when your dog loves to be rewarded and which treat pleases him the most.

It’s not like magic to show the results from the first day, but it works slowly, and you must show patience. Dog training techniques based on the relationship are the most apprehended techniques, although it takes time. It does not have a single formula to train the dog. Actually, it’s a hybrid technique aimed at the ultimate goal of training without punishing the dog. No matter the reward is in the form of treating, praising, or hanging out with your pup; your dog will enjoy it.

For example, a dog must be trained enough to sit down while his owner is preparing a crunchy dish for it, and you must have the patience to foster communication and training of your dog.

It’s not important which approach you use to train your dog; the only thing that matters is how productive your dog training techniques are. Patience and consistency are the keys to success, and your dog will be well-trained for sure if you keep patience and train him regularly. Understand your dog’s body language and give rewards to get an immediate and long-lasting impact. Punishing the dogs is not an appreciable approach and you must avoid it if you want to prevent your dog from developing behavioral problems.

If you want to read other articles about dog care, nutrition, health, and breeds, you can visit Dog Vet Tips.