Native to Turkey, the Anatolian shepherd pure breed is a large working and companion dog. Well-known for its fiercely protective behavior toward its owners and strangely opposite to it is its fiercely wary towards strangers. Its immense size suits it the best as a guard dog. Novice pet owners should keep in mind that its stubborn nature with a mighty size makes it a fierce combination to handle for novice pet owners.

Early puppyhood training may train them to socialize well. Otherwise, it may knock over the kids while playing with them, and they may chase every second pet they will come across.

It’s not a hard and fast rule to which breed; breeders should mix the Anatolian Shepherd to get the desired dog breed. And again, they are not sure that they can get the desired results, and it takes years to refine a mixed breed into a pure breed.

The bottom line is breeders wish to get one hybrid or designer dog furnished with the characteristics of two different breeds. The idea of getting traits of other dogs within one sounds interesting, and it’s not the recent one; breeders are designing mixed breeds from ancient times.

We’ll restrict our discussion to just some typical Anatolian Shepherd Mix breeds to overlook their different new personalities and their general characteristics. 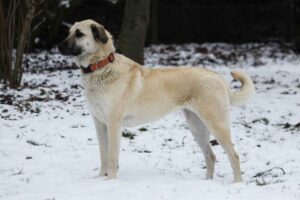 They have a thin outer coat with a dense inner coat that is straight primarily but sometimes slightly wavy.

Unfortunately, this breed sheds a lot, not just occasional but also seasonal. Although it requires bathing a few times per year, you must brush its dense coat frequently to avoid matting. If you do not agree to compromise on this nuisance this Anatolian Shepherd mix probably can’t be the four-legged friend at your home.

This athletic working dog requires at least one to two hours of exercise to keep them physically and mentally fit.

The hybrid breed of Anatolian shepherd and the great Pyrenees is known under the name of Anatolian Pyrenees. Although Anatolian Shepherd is already a large breed, you’ll get an even more giant breed after crossing it with Great Pyrenees.

It’s well suited for herding and a companion dog and is friendly with pets, other dogs, and kids but not suitable for novice owners.

Its coat is white or Cream colored, having brown or black markings over the body. You may also come across Anatolian Pyrenees with different colors like brindle, Pinto, and fawn. Its long, medium to long-haired coat is not waterproof.

It is an above-average shedder and high-maintenance pup.

It’s a high jumper and escape artist, so keep your high fence ready if you want to own it. And it requires a high level of daily activity to ensure mental and physical fitness.

You can count Plush Danios as a designer breed of Anatolian shepherd and Great Dane. Great Dane is a sweet and calm massive lapdog loved by the pet owners because of their rare combination of giant size with sweet nature.

Both the Anatolian Shepherd and Great Dane are large and protective dogs breeds. Breeding them together results in a massive and sweet-tempered pup. Great Danes have a short life span and a lot of health issues that can be overcome by crossbreeding it with Anatolian Shepherd.

Plush Danios is a shy, somehow fearful dog in front of strangers but quite responsive towards its owners. It’s not suitable for families with small kids. It needs proper training to socialize with other pets at home but is not ideal for dog parking.

Different colors, not just some colors

Twice or thrice grooming per week is a must to avoid the matting of the double coat.

Bathing once a month and clipping their nails after every second week is enough to avoid any nuisance. Check their ears every month to clean them.

A crossbreed of a Golden retriever and an Anatolian shepherd is Anatolian Retriever. Probably the first breed that clicks your mind when it comes to retrievers is the Golden retriever, and for sure, it deserves to be enlisted among the best family-friendly dogs and free guard dogs. It’s not much wary and protective towards strangers. It’s more energetic than the Anatolian shepherd, and mixing these dogs does not fit the best.

It’s family-friendly, easy to train, apartment lover, suitable for novice owners, and playful dog. Its athletic body is highly suitable for kids, families, and farms guarding as a guard dog. It’s not hypoallergenic and a loud barker.

It needs a medium amount of grooming to maintain the original appearance, and it sheds averagely.

It requires a lot of physical and mental exercise and is very destructive if it is not provided with proper physical activity because it gets bore quickly.

Husky is friendly, and no one is a stranger to Husky and is a working dog but less than the Anatolian Shepherd. It’s used for pulling light loads and is a dignified and fastidious pup with medium size. It’s amiable and sometimes aggressive. It’s an innate watchdog and bred to chase other small animals.

Siberian Husky is a better listener and more playful than an Anatolian shepherd with kids and other family members and strangers.

It requires little grooming because of its small fur.

Not much information is known about this type of Anatolian Shepherd mix breed.